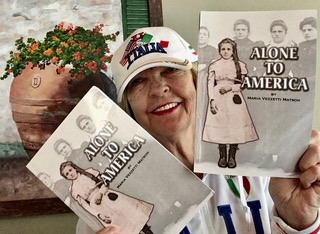 Imagine being Gennie—what would you do?
A startling letter arrives for Gennie’s fourteenth birthday. It is from her older brother in Michigan. He needs her help and includes money for travel.

The year is 1902, and the journey from Gennie’s home in Tuscany, Italy, to copper mines in America sounds exciting. But nothing happens as planned. At the last minute, Gennie discovers she must go alone. She feels terrified but obeys her father and departs. She survives a life-threatening illness during the ocean crossing and delights in arriving in New York Harbor. Still, a thousand-mile train trip remains to reach her final destination. For this solo traveler, the cultural and language differences create shocking situations. Despite this, her kind heart, curiosity, and storytelling skills lead strangers to help her. The surprise at the end of Gennie’s adventure makes it all worthwhile.

Purchase on Amazon: Alone to America 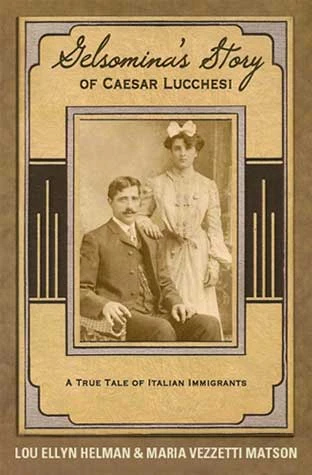 There’s a book within each of us. Perhaps it is about you or another family member. I didn’t have to dig deep into my family’s history to get a story. I heard it all from my grandmother, and it was her story that had to be recorded.

Gelsomina’s Story of Caesar Lucchesi was my passion project. I wish I had listened more, asked more questions, and taken notes when the elders of the family reminisced about coming to America from Italy. They are all gone now, but the story lives on.

It was after my mother had died (2008) and while cleaning out the family home that I found memorabilia from the first generation. There were notes written by her grandmother, old photos, and newspaper articles about the Lucchesis. The blank inside of a greeting card was filled with dates, locations, comments. It was in Gelsomina’s writing and titled, My Life Story. The pieces of the story were all there- I just had to figure out how to put them together. I didn’t do it alone, Lou Ellyn Helman, agreed to help me. We met in 2009 when she portrayed Gelsomina in a local history fashion show. It was all meant to be.

Many American families have a similar tale. It’s a story of immigration from Europe to a new land, of hard work, perseverance, assimilation, and success in their new country.

Research into the three generations of the Lucchesi family brought me face to face with what days and nights must have been like for her, an innocent, young girl journeying alone from Italy to a small mining town in Michigan in 1902. Living and helping with chores in a mining boarding house and surprising everyone by eloping with a boarder was quite a beginning. Their life together building a family and a successful business shows perseverance and intelligence. Caesar was a pioneer in aviation and stated, “His only regret in life was never flying a jet.” As Gelsomina and Caesar grew, so did America-from horse-drawn carriage, automobiles, airplanes, and, finally, the information age and computers.

The book engages readers and, hopefully, motivates others to ask and learn about their past. I want to remind you to get it down on paper while you still can.

A small, independent publishing house that focuses on Italian-American immigrant stories, Polenta Publishing, is the publisher.

Gelsomina’s Story of Caesar Lucchesi can be purchased at the following retailers:

Talk to Me or Learn More...